We still know the harms of alcohol and absolutely do not deny the dangers caused by alcohol. However, as reputable physicians in the public, with the primary responsibility to take care of the health of the community, we invest a lot of effort and wisdom to prepare medicinal alcohol. It is not simple to follow the needs of the majority of people who love to drink.

We are aware that: Alcohol has nothing to do with health, not only that it also brings many significant benefits! Like the sword, it has no sin. When in the hands of a staff it contributes to the defense of justice and protects honest people. When in the hands of a thug, it becomes a weapon that causes catastrophic grief. The problem is entirely in the nature and consciousness of the user.

The ancients still said: "Men are immortal," "alcohol is clear to cheer up the spirit". Ancient medicine books have a saying: "Tzu's power works in the blood zone. The most humid to apply natural sorrows ”. Please explain: Alcohol can circulate blood vessels and ward off evil spirits. Drinking a glass, thousands of sadness also resolved. So alcohol has the effect of circulating blood vessels and improving the spirit. There are many diseases that occur from the cause of poor blood circulation. Among them is a dangerous disease with a high mortality rate, which is coronary artery obstruction. Oriental medicine teaches that: "Uncommon system, uncommon communication", that is, if not through, it causes pain, it causes all pain ". Alcohol is a significant player in the above mentioned circulation.

A good poem from the old times about health care is widely spread with the content:

The dawn of the tea tree

That means drinking a glass of wine at night, drinking a pot of tea early in the morning, having sex every seven days, the physician does not come home.

With modern science, researches on the effects of alcohol have been published:

In 1979, Cochrane scientist - A great tree of medicine and two colleagues studied the topic "Causes of different death rates from heart disease in 18 developed countries" including the US, UK and Australia. . Research results show that there is a clear and significant relationship between alcohol intake and a reduction in the incidence of ischemic heart disease.

In 1986 researchers surveyed a group of more than 50,000 male doctors in the United States about drinking alcohol and health status for 2 years. They found that drinking alcohol in moderation and with alcohol intake was nearly preventive of coronary artery disease.

That suggests there is a sweet spot for alcohol consumption, a level between drinking very little and drinking a lot, at which point the benefits of alcohol for heart health balance the risk of dying of all causes.

In 2005, there was another study with health workers (32,000 women and 18,000 men) to answer this question by looking at how drinking habits affect not just cardiovascular risk. and with physiology. People who drink 1 to 2 drinks, 3 to 4 times a week have a lower risk of heart attack, which the researchers believe, due to alcohol's beneficial effects on HDL (Good Cholesterol) Cholesterol and with Hemoglobin A1c ( markers for diabetes) and fibrinogen (to help with blood clotting).

All three factors play an important role in metabolic syndrome, they signal cardiovascular disease and diabetes. Other studies show signs that alcohol can alter the balance of these factors for the better, meaning that moderate drinking can be healthy.

Alcohol is classified as one of the stimulants, but if you know how to use and use the correct dosage, it can prevent and treat diseases very well.

Wine has penetrated deeply into the human heart as the inevitability of life:

- Wine is an indispensable symbol of devotion in the ritual. (Immortality failed ceremony!)

- Alcohol is a communication tool, an emotional connection in social relationships

Not to buy, not money to buy)

- Alcohol is a tool to clear up the spiritual life.

(Hand raises the cup of wine to an eyebrow

(Uncle Cuoi sits at the base of a banyan tree

(Tonight the wine is only one vote

Alone a cup with constant sadness

Drink all the chains in the heart!).

In the preparation technique of Oriental medicine, alcohol is the ideal solvent to extract medicinal substances from medicinal materials. Alcohol is drawn from medicinal herbs with the ratio of active ingredients more than twice that of boiling water, and at the same time removes the medicinal resin and useless impurities. The resulting medicinal substance has a clear color instead of a dull color when extracted with boiling water. With rare ingredients and when an aesthetically pleasing product is needed, we often use the alcohol extraction method. After that, using distillation method to recover alcohol to get medicinal ingredients. Since ancient times, alcohol has been involved in dosage forms to turn into medicinal alcohol along with the complete forms of medicine, antidote, powder and high medicine. The medicinal alcohol dosage form has the ability to absorb quickly and bring outstanding performance. However, it is limited by many patients who cannot use alcohol and have some medical conditions that must abstain from alcohol.

In the ancient remedies, the ones that have the effect of enhancing physiological abilities, most of them are mixed with medicinal alcohol. Alcohol is not only a solvent, but it also has the ability to circulate, push the blood where it is needed to make an erection on demand. At the same time also has the ability to increase arousal for sexual feelings.

Sexual sexual pleasure is a gift of the Creator to mankind. It is released from the quintessence of energy with affection and develops according to the changing laws of maturity and gradually decreases in harmony with the life of the organism.

Should have relied on the laws of nature to enjoy, only adjust when sick. But in life few people do that! People often abuse too much, then follow the tastes, the "giants" have been diligently researching and releasing hundreds of types of products just for enhancement and arousal!

Often people are only interested in the kidneys and kidneys, and few people care about the heart, lungs, and liver to work so hard to take care of it. Only when it brought illnesses to cure or when it was too depressed, did it need to be bedridden to think. Sometimes thinking about it is too late!

In fact, sexual physiology is not only due to the kidneys. Although the kidneys are healthy, how can the genitals work, what to do when the body is chest tight, has difficulty breathing, is in asthma attacks or is suffering from painful cirrhosis or is having a heart disorder ... As long as one of the internal factors is abnormal, sexual performance is not perfect. Therefore, in order to restore and enhance physiological abilities, it is necessary to take care of nourishing, enhancing comprehensively and to harmonize organs with each other. With a healthy, balanced body, there must be a desire for sex and a wonderful natural pleasure. Nature is absolutely necessary, to maintain it and to protect it. In sexual relations, when the "natural" takes control, it also brings pure pleasure mixed with love between couples.

In fact, there are also cases of forced sexual arousal because in the past due to being overly addicted to another type, or by being too interested in work, forgetting. In cases of deliberately forgetting and then trying to remember when they do not, they are also considered to be a disease and must use stimulants to recover. In the case of weak organs, diseases, accidents or excessive abuse to the point of body collapse and impotence, if you want to revive and enhance your sexual ability, you should not use drugs alone. stimulated to be positive. Just as if the furnace wants to rise, in addition to blowing in, there must be more fuel. Without adding fuel, the blowout can only be done once or twice. When the fuel is exhausted, blowing in will only stop the leak!

To restore physiological and sexual functions, comprehensive recovery must be performed. Treatment of "helpless" must be harmonized and fostered with the policy of restoring, strengthening the organism, stimulation is only secondary. There is also a need for a high level of awareness in "conserving capital". Using sexual physiology must "balance revenue and expenditure", not against the laws of nature and should not deceive real feelings to get fake feelings for life ...! 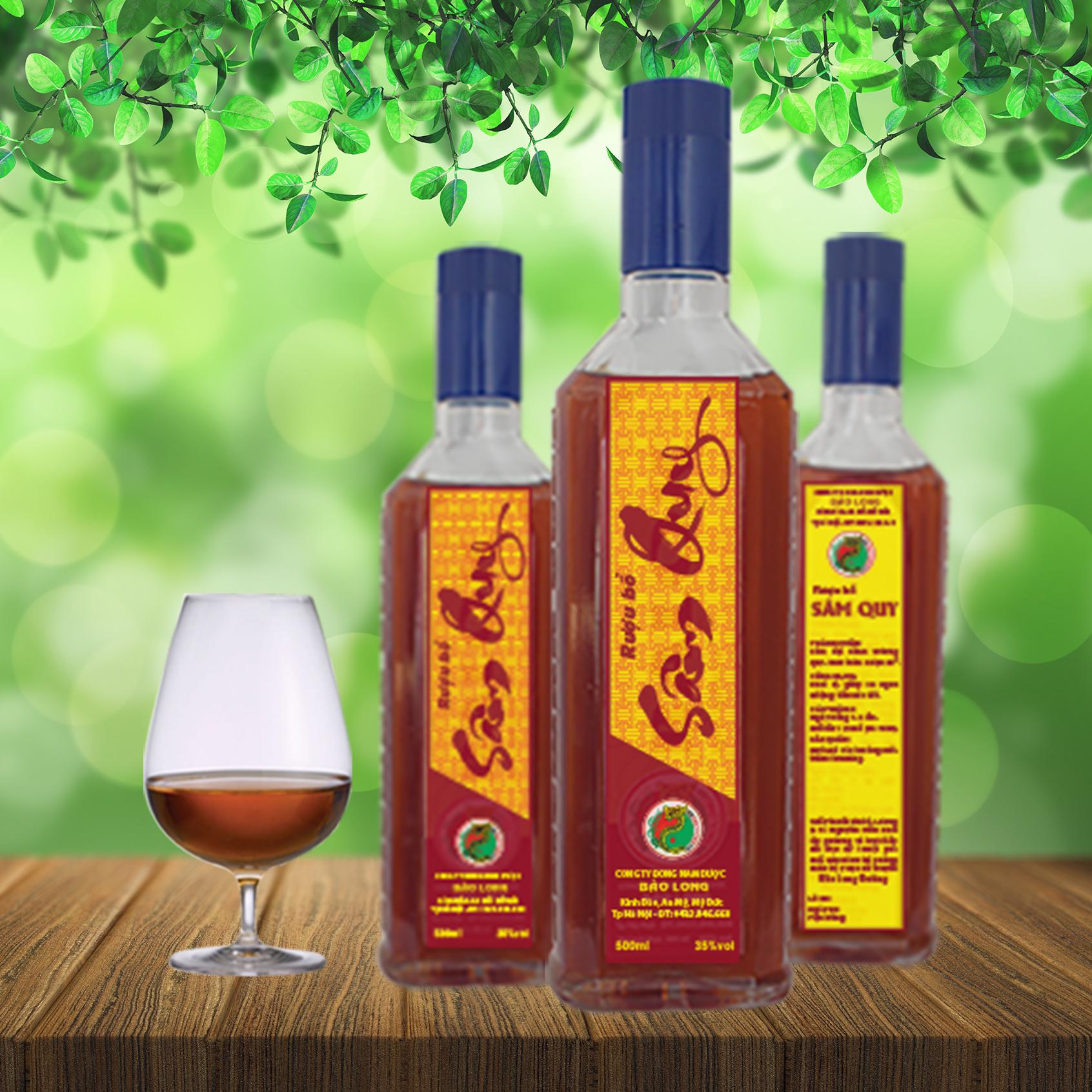 With the above mechanism and dialectical logic together with decades of research and experimentation, we have invented a medicinal alcohol product called "Bao Long Duong". Medicinal alcohol "Bao Long Duong" is extracted from medicinal herbs. No toxins, no side effects. With the main ingredients: Dong Quy, Ginseng, Field, Do Trong, Licorice, Radiant, Thanh Thien Anem, Mr. Silkworm ... Alcohol "Bao Long Duong" works: Improving the function of the viscera . Additional blood, tonic kidneys. Treat fatigue, weak physiology, apathy with sex and impotence. In the remedy, the "Silkworm" is the king because of its outstanding sexuality.

We only use males. The male male when biting the cocoon comes out of his belly filled with sperm, he immediately looks for the female to mate. Mating time is usually over a day. No creature can perform sexual intercourse for so long! During that time, it slowly pumps all the sperm into the female. After being satisfied and fulfilling its duties, it peacefully ended its life, with its body as empty as a corpse. The children are placed on a piece of paper and then put the bowl up. After that it lays the egg over the paper in a circle. Then millions of these eggs hatch into silkworms. With outstanding semen, spermatozoa, with high conception efficiency, silkworm's son from thousands of years ago has been used by doctors in the preparation of drugs for treating physiological impairment and infertility.

We deliberately prevent sexual arousal to avoid "hard to master" for the user, but only increase energy, increase erection capacity, increase endurance, increase pleasure and combat fatigue. Therefore, after using the drug "Bao Long Duong", if not able to have sex, it will not hurt. But when "joining in", it is full, powerful and nothing to complain about ...!